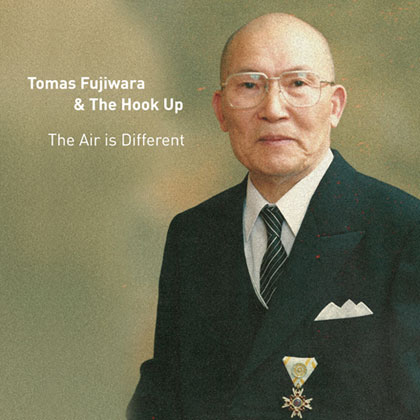 Brooklyn has been a hotbed of creative jazz for the last several years, and it shows no sign of abating. To wit: the raucous yet architectural music of drummer Tomas Fujiwara. On The Air is Different his Hook Up quintet demonstrates its scope with a program that allows a swirl of singular motifs to have their say while still presenting a unified statement. At various points saxophonist Brian Settles growls, trumpeter Jonathan Findlayson coos, and guitarist Mary Halvorson screeches; the cagey rhythm section of bassist Trevor Dunn and the bandleader give these disparate textures a solidifying glide. Elements of swing have as much say as elements of rock, and Fujiwara’s compositions are eloquent, whether they’re musing poignantly, as they do on “For Ours,” or celebrating agitation, as they do on “Double Lake, Defined.”

Breadth is something Fujiwara is truly invested in. In the liner note he quotes Fela about rhythm’s responsibilities, and reveals inspirational sources that include Bjork, a Buddhist bell-bowl, and first 16 bars of Talib Kweli’s rhyme on Black Star’s “Definition.” The curves that mark “Smoke-Breathing Lights” – a piece about the way different people walk – is a microcosm of the program. In the middle of a 10-minute suite (of sorts) there’s an exchange between Halvorson and Settles that gives each a chance to move from stormy to sublime. Something similar happens on the title track, dedicated to Fujiwara’s grandfather, a Buddhist priest. It begins with a march feel, makes room for a knotty passage, and harks to Coltrane’s Interstellar Space with a romp between Settles and the drummer. Agility is a prerequisite for this outfit, and as the music morphs, a thesis starts to float between the passages: life’s contours are many, and you’d best be prepared for what’s around the corner.

This entry was posted in Uncategorized and tagged drums, jazz, mary halvorson, Tomas Fujiwara & The Hook Up. Bookmark the permalink.