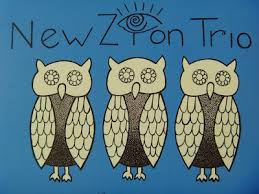 The way Jamie Saft funnels his piano visions through a dub filter is one of the most arresting variations on the trad trio sound that has come along in ages. Imagine Ahmad Jamal genuflecting to Haile Selassie while receiving whispered advice from local rabbi Scratch Perry and you’ve got an inkling where this interplay-addicted outfit and its hypnotic riddims are headed on any given night. Their Fight Against Babylon will take you away for awhile, no doubt.

Where All The Big Decisions Are Made

Posted on September 22, 2012 in Uncategorized

Take the eerie atmospherics of Scratch Perry and apply them to the realm of acoustic piano. Add a flair for insightful improvisation tempered by years of experimental derring-do, and voila: In a flash, you have Fight Against Babylon, one of the year’s most bewitching small ensemble records. Pianist Jamie Saft, bolstered by the springy riddims of bassist Larry Grenadier and drummer Craig Santiago, comes up with a dub-influenced jazz program that reflects Jamaica’s studio sorcery while harking back to Alice Coltrane’s dreamy elaborations.

On “Hear I Jah,” Saft switches to a Rhodes and launches into a prayer with fervid conviction. The band may be genuflecting to Scientist and Augustus Pablo, but it’s Lonnie Liston Smith who opens the Pearly Gates. Through warm clusters of keys, the pianist weaves a rich fabric of sound. “Lost Dub” allows things get sparse again, and the song’s insistence becomes addictive. Ultimately, the groove supplies the leader with all the liftoff his reveries need.

Posted on August 1, 2011 in Uncategorized

Since the main thrust of Dylan’s canon has been the way he’s wielded words, it’s a bit odd that instrumentalists would be jumping into his songbook. But those Zimmy melodies are rather remarkable as well, and from Bill Frisell’s “Just Like a Woman” to Marty Ehrlich’s “I Pity The Poor Immigrant,” they offer improvisers some sweet turf to plow. Everyone’s celebrating the man’s 70th birthday, which takes place on Tuesday. Here are 10 jazz pieces to plop on your playlist.

Slave ships, chain gangs, bootleg whiskey – Dylan drums up a portrait of psychological decimation citing spots “where many martyrs fell” while burglarizing the melody of “St. James Infirmary.” Ehrlich salutes such incisiveness with one of his most passionate soprano outings ever. With guitarist Marc Ribot plucking along, the saxophonist goes for several deep moans, sustaining the melancholy and milking the sorrow.

Michael Moore, Lindsay Horner, and Michael Vatcher get the prize for the deepest dedication to the Dylan songbook. From “Lay Down Your Weary Tune” to “One More Cup of Coffee” to “Sign On the Window,” they have turned overlooked nuggets into unexpected beacons on three distinct albums. “Dark Eyes” is a perfect example. Eloquence is everywhere on this genteel stroll through the sullen ballad. Somehow it finds beauty at each turn.

Every time it seems as if there’s nothing left to do but rubber stamp this ‘60s track as misguided hokiness, something about said hokiness becomes a bit more attractive. The soft glow of the tenor giant’s tone – full of air yet full of heart – balances the icky formula moves of the strings and the rhythm section. Commercial silliness with a heart of gold.

There’s a chill in the air when Zimmy wanders lower Broadway mumbling “I hate myself for loving you.” Breaking up is hard to do, no doubt. Pianist Saft, in a full Dylan program, lets bassist Greg Cohen do all the emoting on this Planet Waves plaint. And tempo-wise they take the title as an instruction.

5 “I Shall Be Released,” Nina Simone, Just Like a Woman (Sony)

Odd that she would use a slow grind groove to wax plaintive about being hemmed in, but then again idiosyncrasy is her stock in trade. It’s got the church, it’s got the barroom, and the depth of its blues reverberates in several key phrases (“every man must fall”). This album also features a capable take on “Just Like Tom Thumb’s Blues.”

He attacks it from the downbeat, like he can’t wait for everyone within earshot to heed the call. When I first heard it I thought it was a tad fussy – over-arranged. But Josh has a way of making intricacy sound natural, and as the blues creep from the piano and the tempos aggressively shift (“the wheel’s still in spin,” indeed) the message hits home.

She once told me that she’d never heard the iconic fantasia before she recorded it in 1996. Seems impossible, right? But the ardent way Abbey dances below that diamond sky glows is full of a newcomer’s joy. Happily, the performance also resounds with a veteran’s perspective for narrative. Gotta think she was reading the lyrics from a page in front of that mic, but between the drummer crashing and the bassist twirling, she sounds like she’s singing a story she’s been waiting forever to tell.

In the intro, he searches for answers as he twists the melody: “Where did you go/what did you see?.” I didn’t know it was possible for desolation to be dreamy, but acting alone, Frisell comes up with a stretch of sound that could drive a few chapters of McCarthy’s The Road. Later, when Viktor Krauss and Kenny Wollesen kick in, the sweep makes everyone waltz the plank.

This one takes the protest to the explosive level. You can almost see the drummer and his crew (Cline, Sheinman, Sickafoose, Crystal) landing a punch on the chin of the Bush/Cheney machine (the disc was released in 2003, during the Iraq invasion). Carla Bozulich’s wailing anguish is a blend of Yoko and Diamanda, perfectly integrating with the instrumental onslaught, especially that martial undertow.

The buzzing alto, the pulsing rhythm section – both ignite to parallel the original’s ornery mania. Some “rules of the road have been dodged,” no question. But the trio makes sure its frenzy is lined with grace. The whole thing is utterly buoyant; even special guest Bill Frisell’s fractious solo errs on the side of shimmer. The galloping tempo is still palpable long after the music fades away.