How far are we from actual Facebook or Tumblr-based news organization? Are you a news publisher? Ask yourself what your CMS does that Tumblr doesn’t.

If you put me in that dungeon, and remember Rockefeller at Attica, you’ll get a hell view of Bellevue, where the E flat shoes of the fisherman’s wife are some jive ahhs flat slippers – assuming of course that Sigmund Freud’s wife is Faubus’ mother. Eat that new now chicken and get it in your know how soul.

Charles On The Move  Birthday Bash On WKCR 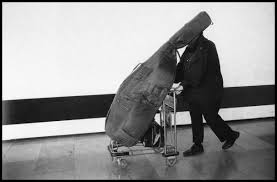 His mom would ask who he was talking to and he’d say, “Ol’ Dirty Bastard.” Dirty had passed a couple of years earlier.

“So what was he saying?” “He was telling me what bus to get on when I cross over. He said, ‘Don’t get on the red bus, get on the white bus. The red bus looks fun, but that’s not the one.’” So Dilla’s mother told me that and when we were in the studio the night we heard about his passing, we paid homage to him, resting in beats, by writing that song.

“It’s Ol’ Dirty, wants to give you directions home, says it won’t be too long.”

Posted on February 22, 2013 in Uncategorized

Now I can move to Hawaii and take up oil painting!

Posted on December 11, 2012 in Uncategorized

i never asked to play clarinet. literally. in sixth grade, after giving up piano and trombone, i decided i wanted to play the saxophone. my parents decided instead that i would play the clarinet. this decision was partly economic (cheaper rental fee) and partly aesthetic (my mom hated the saxophone). i went along with this and pretended the clarinet was a saxophone. i did this so i could stick with clarinet long enough to get a real saxophone (something my parents promised me if i showed some discipline). consequently, i became pretty good at an instrument that i never really wanted to play. and so my plan backfired. getting good at an instrument made it harder to convince my parents that i should be allowed to quit so i could instead play a different instrument. but after five years, i finally did get a saxophone. and even though i’ve studied the saxophone diligently, i’ve never developed the natural affinity for it that i have with the clarinet. and even though i’ve tried to quit the clarinet several times, excellent composers like darcy argue have stipulated that to be in their band, i need to play (bass) clarinet. so here i am, thirty years later, still playing the clarinet.

this is why i describe my relationship with the clarinet as “ambivalent.” The percussionst/composer’s sextet can seem like two or three different bands during the course of a set: They’re enamored of precision, and make their sharp turns and signature rhythmic shifts with perfection, but they also crack open their tunes, giving interplay as much room as needed to detonate a series of explosions. On this two-nighter they integrate Theo Bleckmann’s dreamy vocals into the mix.

You had Sugarhill Gang and Blondie playing on the same bill. It was before the time when people were afraid of mixing up genres. It was so new, no one knew what genre they were in, really. And New York being geographically small, it was quite easy to get around, so there was lots of people connecting. The Clash did great dance remixes, you know? And they were played on that radio station Frankie Crocker used to DJ on (WBLS), and it was kind of exciting on that level, because that was new, that was different. In a lot of ways, Some Girls reflects those comings and goings. – MICK JAGGER

With the exception of the imperial offspring of the Ming dynasty and the dauphins of pre-Revolutionary France, contemporary American kids may represent the most indulged young people in the history of the world. It’s not just that they’ve been given unprecedented amounts of stuff—clothes, toys, cameras, skis, computers, televisions, cell phones, PlayStations, iPods. (The market for Burberry Baby and other forms of kiddie “couture” has reportedly been growing by ten per cent a year.) They’ve also been granted unprecedented authority. “Parents want their kids’ approval, a reversal of the past ideal of children striving for their parents’ approval,” Jean Twenge and W. Keith Campbell, both professors of psychology, have written. In many middle-class families, children have one, two, sometimes three adults at their beck and call. This is a social experiment on a grand scale, and a growing number of adults fear that it isn’t working out so well: according to one poll, commissioned by Time and CNN, two-thirds of American parents think that their children are spoiled.

Tagged The New Yorker, Why Are Kids So Spoiled?

It was like the first time I saw an Art Tatum transcription book. Unbelievable what had actually been put on the paper. What he actually DID. that it’s possible. You know it’s something that really different and really great.

Lament For A Straight Line
Blog at WordPress.com.
Loading Comments...